What was the highlight at this show: a bold fabric choice for menswear or an extra-long train? We are talking about the WEISHENG PARIS SS2023 Menswear show, which happened tonight at Oriental Paris.

WEISHENG PARIS is dedicated to creating vintage-inspired, modern perspectives on contemporary European fashion, fusing the romance of the golden era of fashion with the industry’s latest innovations.

The fusion of European romanticism and genderless clothing was on full display in this show.

Beautiful young man wearing corset skirts with the extra-long train standing in a garden with colourful flowers. This garment used to “beautify” women and ensure modesty has now become a symbol of liberating men’s dress freedom under designer WEISHENG’s hands. His designs reveal his unshakeable belief that fashion cultivates confidence and empowers people to be who they are and live as they please.

The feather element that appeared in the previous season occupies a more significant proportion in this season, and it can be seen that the designer has also made a new attempt to combine feathers and other fabrics. He embellished feathers in light lavender colour on a pair of ordinary men’s trousers. The rhythm formed by the swaying of the feathers as the model walked reminded the audience of this moment of liberation of menswear. Adding up with the neutralization of a long train. The entire show shows the designer’s trade-off between modern pragmatism and classical romanticism.

The collection uses a unique colour palette that clashes with the background of the show location but also strikes a balance between natural colour palettes.

WEISHENG has changed the traditional way of men’s clothing tailoring. The superimposition of shoulder layers and sharp tailoring are matched with summer colours, which are both functional and ornamental. As well as the selection of translucent fabrics in some designs and the lack of excessive covering of male parts, this show has pushed the show from the design level to the height of male dressing freedom.

A glossy-black-based jacket with a pop of yellow, mixed with a tube top corseted pleated long skirt makes a dramatic contrast, but at the same time, it seems like a strong statement. The softness and elegance of womenswear combined with the practicality and firmness of menswear made the show a naked but romantic modern fairy tale.

The Paradox of Luxury: Being of Our Time and Timeless

The earth’s climate has always changed 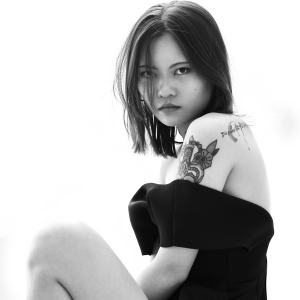